If you’re like me, you may have called this symbol -- “#” -- the pound symbol, or an abbreviation for the word “number”. But another name for it is “hashtag” or “hash symbol” and it’s become rather significant in the social networking world.

A hashtag plus a word (one word, no spaces) creates what you might think of as a topic. According to what I’ve read, it started as a symbol used in programming language, and then started being used in Twitter to tag topics. Now it’s used in many social technologies, including Facebook, and it’s even being used now in a kind of slang/humorous way (more on that later).

When you and others use the same topic, that hashtag + word combination becomes a click-able link. When you click on that topic, anywhere it’s used, it acts as a filter and you’ll see all the posts where that topic has been used. It makes a collection that serves as a sort of discussion trail.

Below is an example from Twitter, the results of clicking on the topic “#churchiscool." 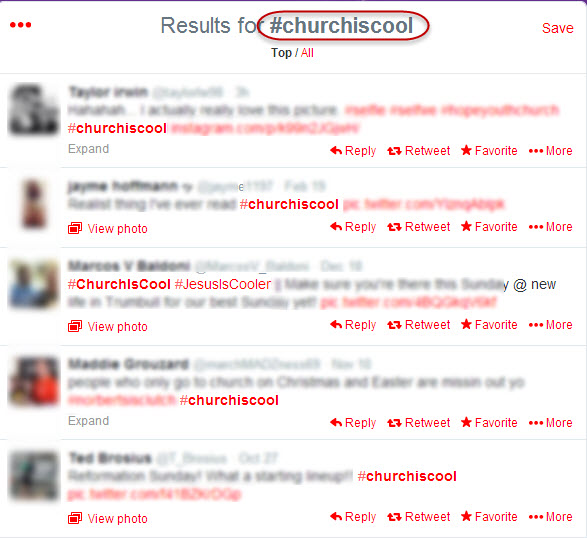 You can see how each person used that topic somewhere in their post, and now you can read through all of them in the collection.

OK, so why are we talking about hashtags in relation to sermons? Because hashtags/topics can be a way to encourage participation from the congregation during the sermon. Many people have Twitter or another social network on their mobile device. Everyone can agree on a topic that they’ll use, and tweet questions, comments or discussion items during the sermon. Sometimes speakers will show the resulting discussion/collection “live” on a screen as they are speaking. Sometimes they’ll check it after they’re finished speaking, in a similar way to inviting Q&A after a talk.

Recently, where I work, our president used this method during a company meeting. He posted a simple “Welcome #meeting” and told everyone at the beginning of the program to use the #meeting to post questions or comments. When he was finished speaking, he checked his own phone for the results and responded. It was kind of cool!

I admit, it’s strange having people tapping away on their mobile devices while you’re speaking. You hope they’re participating in the speech (or sermon) but, of course, you have no way of knowing. It can be distracting, both to the speaker and to the participant, who may get distracted by the many other things vying for their attention on the device, or even by the other participants’ posts on the subject.

I personally take notes during the sermon and it helps me focus. If you have the discipline to use your device only to participate in what you’re hearing in the sermon, theoretically this could help you focus, too. It does provide a tool for immediate responses, and there are so many of us who’ve gotten used to communicating via our devices, it is a viable alternative to other methods.

Have you participated in the use of hashtags during a church service? How about a different event? What do you think of the idea?

PS - A note about the slang/humorous use of hashtags: It’s become popular now to use hashtags plus combined words at the end of a post as a kind of funny comment on whatever you’ve posted, rather than a true shared topic. It reminds me of figuring out personalized license plates. For example: