The front-and-center project that’s consuming time and thought these days is a parenting workshop that my husband and I will be teaching in March. Preparation includes reviewing everything we’ve read about parenting in the past couple of years, remembering everything we’ve stumbled upon in the past two decades in the trenches of parenting, discussing all our shared memories of what worked and what most certainly did-not-work, and then trying to wrestle it all into an outline that will carry the content toward a substantive conclusion in a mere 45 minutes.

Without sounding too negative, it has occurred to me more than once in this process that parenting keeps circling back around to the topic of sin management — the parents’ first of all, and then the child’s. Because of the Gospel, we are enabled to “put to death” our own selfishness, laziness, willfulness, impatience, and complacency long enough to assist our delightful offspring in stamping out the same qualities, all with a goal of following together our yearning for obedience to the law of God which has been written on our hearts.

What About Original Sin?

In the providence of words that arrive at just the right time,I found G.K. Chesterton’s theological ponderings on original sin in my reading of Orthodoxy. Although he and his wife Frances were never able to have children of their own, I hear a latent understanding of kid-nature in this thought:

“Certain new theologians dispute original sin, which is the only part of Christian theology which can really be proved.”  (27)

Certainly, plenty of evidence has been amassed here in the Morin compound to prove the doctrine of original sin, and in conversations with other parents, I’ve finally realized that we aren’t the only ones with dented sheet rock from illegal indoor-baseball-throwing escapades and memorial corners where naughty chairs were placed on a daily basis.

Whether it’s the Baader-Meinhof phenomenon at work, or whether there’s been an ongoing conversation about original sin, and I’ve just finally tripped over it accidentally, I’m thankful for the moorings in orthodoxy that Chesterton’s writing provides. He laments a “fastidious spirituality” among his contemporaries who “admit divine sinlessness, which they [could] not see even in their dreams. But they essentially den[ied] human sin, which they [could] see in the street.”

For my money, Chesterton’s strongest argument for humanity’s fallenness has more to do with virtue than with vice:

“The vices are, indeed, let lose, and they wander and do damage. But the virtues are let loose also; and the virtues wander more wildly, and the virtues do more terrible damage. The modern world is full of the old Christian virtues gone mad. The virtues have gone mad because they have been isolated from each other and are wandering alone. Thus some scientists care for truth; and their truth is pitiless. Thus some humanitarians only care for pity; and their pity . . .is often untruthful.” (49)

The Tyranny of Wandering Virtues

Parents of adult children, beware the tyranny of free-wheeling virtues when your children begin to make poor choices. We are a generation of parents who will change our ethics to avoid offending our adult children, thinking that this enables us to empathize more fully with their moral floundering. When we value our relationship with our children over our children’s relationship with God, we circumvent the convicting work of the Spirit in their hearts.

And since our politics will follow our ethics, in an article in World Magazine called “Political Pelagianism,” Marvin Olasky references the optimism of policy makers on both sides of the aisle with Democrats assuming only the best of motives and intentions in those who benefit from government programs and Republicans tending to “glamorize the noble CEO.” With no allowances made for selfishness, greed, or opportunistic impulses, can we really view the world (and make laws?) with wisdom?

The Plight of Sinners Parenting Sinners

Tracing this topic back to its origin on a bad day in a certain garden, it’s not difficult to diagnose my most pressing parenting dilemmas. The challenge to live with a submitted will and to accept God’s “hands off” when He puts boundaries around something that “looks perfectly good to me” was the root of the first sin and all subsequent sins. Making an idol of my freedom and control mirrors the very same manifestation of original sin that I confront in my grandson when I refuse to honor his temper tantrums.

Sally Lloyd-Jones takes me back to the garden in plain speech with her description of God’s motive behind the Garden’s one rule:  “If you eat the fruit, you’ll think you know everything. You’ll stop trusting me.” And, of course, God was accurate in His prediction, for humanity has spent every spare moment since then trying to “make ourselves happy without Him.”

Chesterton frames the idolatry behind original sin along with our misdirected quest for happiness:

“. . . if a man would make his world large, he must be always making himself small.”

Yes, and amen. And this would seem to be a worthy goal of missional parenting — and of living our days in this following life. 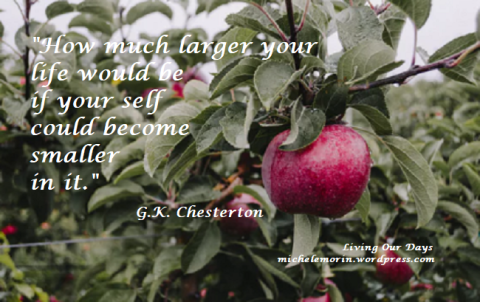 Thank you for sharing this, Michele! You are speaking so much truth (in grace) in this post. I just started reading the book Parenting: 14 Gospel Principles That Can Radically Change Your Family and am finding much overlap with what you just wrote, especially as it relates to recognizing our own brokenness (and our own need for God's grace and forgiveness every single day) and also remembering that we are "ambassadors of God" and that "we are tools in the hand of God to bring change, but we can't change our children."

Something I wish I had touched on more in the post (but I try to keep word count down) is our tendency to emphasize behavior without tying it to the gospel. Listening in to the average Sunday School lesson or parental pep talk, it would be very easy to draw the conclusion that God is most concerned with our sitting still and practicing our manners-- which are certainly great outcomes, but righteousness that does not spring from a new heart is not deep enough to sustain a relationship with the living God.

Thanks for the great book recommendation!

Amen, Michele to "our tendency to emphasize behavior without tying it to the gospel." This is new to me but it makes so much sense. When we are daily reminded of our own dependence on God's extravagant grace, it DOES create a change in us (and our kids). But focusing just on behavior for behavior's sake does not have the same impact.

Login or Register to Comment
Posted In
Children & Youth » Parenting

Prayers for Small Children (And Adults)

Talking to Your Kids About War: Informed and in Prayer

Every Act of the Will

Orthodoxy and In Christ Alone