Justin Skeesuck and Patrick Gray’s presentation about their 500 mile trek on Spain’s Camino de Santiago during Calvin University’s January Series 2017 captured our attention. When they invited us to apply for their inaugural "I'll Push You" Accesible Camino, we hesitated but proceed to apply and then interview with them.

When they informed us that we’d been selected, we were surprised, elated, and more than a bit daunted by the specter of walking the last section of the Camino. Our main concern: How do we do this thing with paraplegia and wheelchair complications? Will the wheelchair survive all the flights? Will we find reasonable accessibility in hotels and restaurants? What will the terrain of the Camino do to our fifty-something bodies over the 117 kilometers of the Camino?

So we rolled up our sleeves and got ready for this adventure. Andi researched the health side of the trip and doctor’s appointments were scheduled to address needs there. We bought a FreeWheel attachment that promised to make Andi’s wheelchair more versatile and off-road capable by raising the front end of the chair a few inches. We bought the requisite hiking clothing and gear since we’d be on the trail up to 15 to 16 miles per day. And we started preparing by getting additional miles in at the network of trails at Red Rock Dam near Pella and through our city streets.

September 26 arrived and we embarked on the trip. Our flights to Des Moines, then Frankfurt, and finally to Santiago in northwest Spain’s Galicia province went quite smoothly. The accessible taxi met us at the airport as promised and we unpacked in our hotel room which was, for the most part, nicely wheelchair accessible.

Within an hour we were on our way to the old city and Santiago Cathedral. We learned early that cobblestones and flagstone result in a very bumpy ride for a wheelchair user! We used the FreeWheel even on city streets from that point on. However, we also enjoyed the unusual old city with its narrow streets and alleys, its sidewalk cafes, and the ambience of the square around the nearly one thousand year old cathedral where the apostle James’ bones are reputedly buried.

Our group of 48 people, mostly from the US, arrived over the next 24 hours. Eleven in our group were disabled, ten in wheelchairs and one person with blindness. On Sunday, September 29, we loaded our two tour buses, one equipped for ten wheelchair users. We drove 117 miles east to our starting point, Sarria. Within the first 200 yards, our FreeWheel became unattached twice causing some anxiety. Fortunately an extra revolution on one bolt did the trick.  We also learned quickly on day one that the terrain was both hillier and rougher than we had expected. However, we had purchased webbing and carabiners, and attached them to the front or back of the wheelchair as needed in order to pull the chair up the steeper hills or restrain the chair from becoming a runaway chair on the steep downhills.

Each day, two or three people would help push and pull those in wheelchairs. Each day was a different group. That allowed us to get to know most members of our group. It required a measure of trust for Andi to allow a variety of people to push and pull, some with no experience or strong sense of the physics of wheelchairs and rough terrain! Unexpected, too, was the friendship developed with other pilgrims on the path.

For Andi, a group of women who had met on the trail became close friends in just a few days: women from Mexico, Brazil, Canada, and Sweden. Many conversations were enjoyed while walking through the beauty of quaint, ancient, rural Spanish villages located in the verdantly green hills and valleys of northwest Spain.

We had expected a measure of solitude and time for reflection on the trail; after all, the Camino, like most pilgrimages, is a time for spiritual contemplation. However, that did not happen for us. Our gregarious group of 48 people was lively, talkative, attentive, and engaged. Those with disabilities were asked to relate their stories over and over. The result was lively conversation nearly all day, every day, from breakfast at the hotel, across the miles of each day’s trek, to the dinners in Santiago’s restaurants each evening.

Our group grew to know one another on a deep level seldom experienced in contemporary life, especially after just ten days together. In fact, my parting words to the group included thoughts on the body of Christ and our group’s taste of God’s intention for his people living together in community and in supportive, encouraging relationship. We were stretched and blessed by our 74 miles on the Camino. 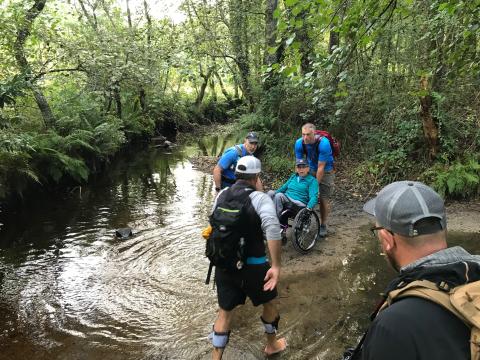 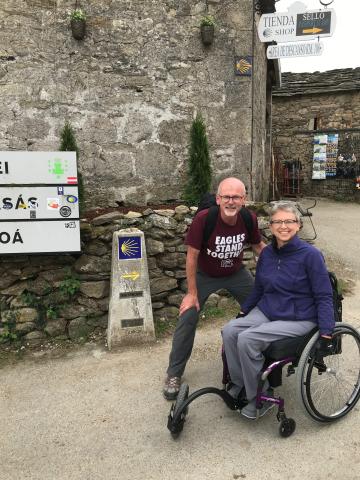 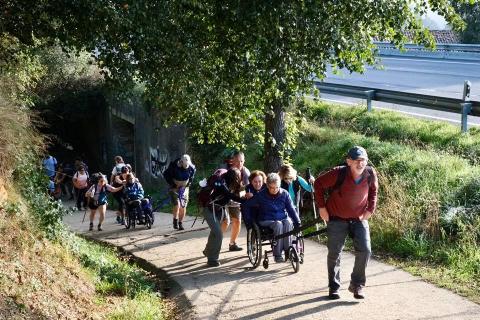 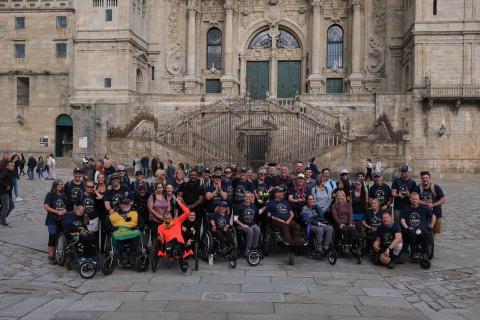 I walked the 500 miles from SJPDP to SDC in Sept/ Oct of 2016. I clearly remember the hill depicted here

It was a killer for me without anyone to push but myself! And I was in pretty good shape by then!

Hats off to you and your team for not calling for a taxi here!

Sounds like a truly marvellous adventure with lifelong friendships made en route. Kudos for persistence.