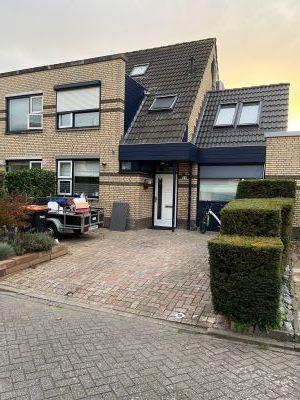 This is a picture I took in late October of a house we lived in from 2009-2010 in Dordrecht, the Netherlands. In 2008, I became the Regional Director of Young Life in Western Europe. I had done the same job in Western Michigan, now I traded Hudsonville, Byron Center, and Big Rapids for Paris, Madrid, and Copenhagen.

I had fallen in love with Europe. They do so many things better than we do—they tell their history more honestly, bake better bread, don’t have school shootings, have better public transportation, eat healthier, even have better toilets (but, alas, not better toilet paper).

I thought I had my dream job, maybe the last job of my career. After commuting to Europe for the better part of a year (I don’t recommend that), we moved into this house in 2009. A year later I was back in Grand Rapids, not working, wondering what had just happened.

As I looked at this house a few weeks ago, memory after memory stacked up in my brain. I remembered sitting on the living room couch one afternoon and suddenly weeping. I remembered losing 30 pounds in six months. Some of that was because I walked or rode my bike everywhere. The rest was stress. I remembered ending my 29-year Young Life career resigning in a hotel room in Spain. There are a lot of scenarios I have invented for my life; none of them involved ending my career in a hotel in Spain.

But another thought came to me as I looked at this house. Maybe I hadn’t failed at all. Is it a failure to learn you’re not supposed to do something? Isn’t that a form of success?

I learned I was done with Young Life. I wish them all the best, but I needed a new direction. A little over a year after I returned from Europe, I was working at Western Theological Seminary, beginning one of the most fruitful and enjoyable seasons of my life. A few years after that, InterVarsity Press published my book about my theological and literary hero Frederick Buechner. I left WTS in 2020, and found a new challenge here, helping make the Reformed Journal happen. These are things I’m proud of and grateful to have done. I couldn’t see any of them coming that afternoon in Dordrecht when I sat on the couch crying.

How does God move in our lives? Sometimes we are guided by gentle nudges or a word from a friend. Sometimes we have to fail.

Another memory came to me, this one from many, many years ago. I was a sophomore in high school. I thought maybe I wanted to be a writer. I got my first assignment for the school newspaper: I was to go to a meeting of the National Honor Society to hear a college professor talk to the NHS students. His topic that evening was embracing failure. He was telling these high achievers that the times they would learn the most in life would be when they failed, which they should welcome. I had no idea what he was talking about. Couldn’t comprehend it. Failure was bad, not good. It took me almost forty years to begin to understand what that professor was talking about.

And then there is this: A dear Dutch friend, who had found that house for us in the first place back in 2009, took us to see it again. We saw her after spending a few days in Belgium with another dear friend from those days. Our friendships have endured. How could I have failed if I made friends like these?

Also, there is this. Let me be frank: sitting on the couch crying in the middle of the afternoon is a mental health warning sign. My subconscious self was telling my conscience self something I didn’t want to admit. I am guilty of ignoring mental health signals. Many of us are. That needs to change. (Even as I write this, part of me is saying, “Don’t tell the part about crying on the couch—that’s too shameful.”)

A path to recovery lies simply in the way we tell ourselves the stories of our past. Rebecca Solnit wrote, “We are our stories, stories that can be both prison and the crowbar to break open the door of that prison.” The past is a prison when we look back at ourselves with judgment instead of compassion. “Memory,” Buechner wrote, “makes it possible for us both to bless the past, even those parts of it that we have always felt cursed by, and also to be blessed by it.” Can failure be success? Absolutely.

It’s a cool house. I am glad I lived there. Wish it could have been longer, but that’s okay. My life wouldn’t be the same without it.

This blog originally appeared on The Reformed Journal.

Login or Register to Comment
Posted In
Leadership » Leadership Development

I Remember, Therefore I Am

S.O.S. Part 1: My Journey of Recognizing, Remembering, and Processing Abuse