From Desperation To Hope

This past October, my Wednesday morning started as usual. I was enjoying breakfast with my wife as we often do on her day off from work. As we sat down to eat, my phone rang.

Viviana from the CRC Office of Race Relations was on the other end asking me for a favor. At that point, I had no idea the magnitude of what was needed. She asked me if I could head over to a church 30 miles away to meet a woman who had been in a car accident early at dawn. Because there was a language barrier, the pastor had reached out to Viviana’s office for help. I told my wife about the accident, and she quickly ran to grab some clothes for the woman, not knowing exactly what condition she was in. We immediately left for the church to meet her. There she was, shaking, cold and scared.

When we walked in, Rebecca ran to us in tears and hugged us. She was so confused and asked how we knew that she needed to talk to someone in Spanish! We explained to her how we got involved. With tears and much fear, she told us what had happened.

She had been driving from Grand Rapids to Holland in the early morning, and because of heavy rain, her car slid, she lost control, and ended up in a ditch. With the adrenaline rushing because of fear and shock of what had just happened, once out of her car, she had not realized her phone had slipped out of her hands directly into the muddy ditch water.

After getting out of the car, she looked around and there were no visible houses, stores, or anything nearby. She decided to walk until she found the first sign of help. She walked for about a mile or two and finally came to a building whose lights were on, so she got hopeful. When she approached the building, she realized it was a church. But being only 5 am, it was still closed. She waited for three hours until some people began arriving. In her broken English she tried to explain to the pastors what had happened.

Before my wife and I got into the place, the pastors told us they would help as they could to get the car out of the ditch. The car wasn’t salvageable. When Rebecca saw that, she was full of fear because she wasn’t sure how she would explain to her husband that the car was useless. My wife noticed she was shaking and fetched the dry clothes she had brought. Rebecca was thankful for them, but even after she had changed and began warming-up, she was still trembling. She told us what worried her more than anything was how her husband was going to react to the situation, because he was a violent man.

After hearing her story and concerns, we prayed with her. Her anguish and desperation to get home was very real. On the way to her house in Grand Rapids, she shared aspects of the domestic violence she was experiencing under her husband.

When we arrived at her home, she used our phone to call her husband. It was impossible not to overhear his angry voice and harsh words to her. Rebecca asked us to talk to him while still on the phone. We spent some time with her, and we encouraged her to reach out to an agency that deals with domestic violence. We kept reminding her she was not alone, and that she didn’t have to live in an abusive relationship.

Reflecting back on this story, we admired the connection and readiness of each person involved to seek someone that would be able to communicate with Rebecca. However, there are some lessons to be learned:

First: it’s important as churches and pastors to be prepared for very unexpected situations. Small things like having a box filled with clothes in case someone will need them, like Rebecca did.

Second: we live in a technological world. Let’s use it. We can use an app that helps us to translate basic stuff but still enough to understand the need of someone that reaches out to our church. Let’s not be afraid of a different language. But, rather use the tools available in our hands.

Third: the importance of having a spirit of readiness to serve people, anybody and whatever the needs are. We don’t know the impact this can have in someone’s life.

Rebecca still keeps in contact with us. She told us that she was getting in touch with the Domestic Violence Agency and taking steps towards healing from the abuse. She calls us often to pray with her, and ask for prayers for the healing of her family who also suffer a great deal from the abuse experiences.

Rebecca has given us permission to share her story, however her name was changed to respect her privacy.

Pastor Enrique Gomez and his wife Febe have been ministering to Hispanic members and visitors of Faith CRC in Holland, MI for about 12 years. 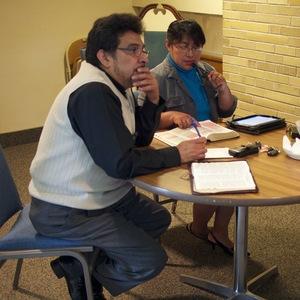 The Saving Name of Jesus in a Jail Cell

The Saving Name of Jesus in a Jail Cell

Will We Listen to the Lord's Call to Love the Needy?