I was just finishing up a discipling session with a church member at a local coffee shop when a man I have seen before but did not know approached me and asked: “I assume you know that Steve passed away on Tuesday?” As I shook his hand I replied, “Yes, thanks for letting me know. I am meeting with his daughters this afternoon to plan Steve’s memorial service. Uh, do I know you?” The man laughed and said: “I am a friend with his family and I noticed a picture of you and Steve in his Hospice room last week. I asked the family, how did Steve get to know the pastor who hangs out at the coffee shop? They shared your story on how you have befriended their Dad and helped him through his illness.”

They shared our story. Steve’s daughters shared the story not only of our friendship but also of their father’s salvation. Steve was a salesman at a local car dealership and I bought my first Malibu from him in 2009. Through the years I appreciated his honest service and I purchased two other cars with him at the Fort Wayne dealership. I stopped at the dealership in December 2015 to get my car serviced and I asked if I could see Steve and they told me he was not at work. He was at a doctor appointment because he was just diagnosed with severe case of prostate cancer and he had one to two years to live. I literally stood motionless and was overwhelmed with a deep compassion and concern for Steve. The Lord also nudged me that I had never shared the gospel with him and shown him the love of Jesus. I begin to pray for Steve’s healing, encouragement, and salvation. The Lord led me to contact Steve the following week and to pray for his salvation.

I nervously called Steve at the dealership to set up a time for lunch. “Hi Steve, this is Jim. I heard about your diagnosis and wanted to meet with you and hear what is happening in your life. Could you meet me for lunch soon?” He agreed and on January, 2016 we agreed to meet at the local IHOP for lunch. During lunch we shared about our families, kids, interests, and then I asked about his medical diagnoses. We also talked about our church background and I asked him if I could ask him a spiritual question. He agreed, so I asked: “Steve, suppose you were to stand before God and He asked you, ‘Why should I let you into my heaven?’ What would you say?” Steve looked at me wide eyed and said “That's a big question. I guess I would say that I have lived a good life and tried to help people the best I can.”

I looked at Steve and prayed in my spirit for the Lord to guide and help me in my response. “Steve, the reason I have bought several cars with you is because of your honesty and care but God’s standard of goodness is far higher than ours.” I then proceeded to share with Steve the gospel of Jesus Christ, our sin, and how to begin a relationship with God and be assured of eternal life is only through faith in Jesus Christ death and resurrection. I could see in his eyes and by his response that this was the first time he heard the gospel presentation. I could tell he was thinking slowly on how to respond and he finally said, “Thanks for lunch and I appreciate you concern.”

I responded by saying: “Steve, I know what you are going through is very difficult. As a pastor I have walked with many people and helped them face death. I would like to walk this path with you to help and encourage you as you deal with the cancer. Please think about this and I will get back with you if you like a friend to be by your side.” As we left the restaurant I wondered how he would respond. I called him a few weeks later and he said he would like to begin to meet together. So began a deep friendship with my car salesman who needed to know Jesus for his salvation, for his peace, and for his eternity.

We began to meet for lunch every 4-6 weeks and we would share about our kids, finances, health and I would share the gospel of Jesus with him each time. I learned how he made over 1,000 skydives and how he jumped off El Capitan in Yosemite Park. We laughed together as we shared our life stories and we marveled on our mutual love for our children. He would call when he needed a ride to the doctor, we mourned together when he could no longer work at his job, and we discussed the different rehabilitation facilities he could move into. We enjoyed many meals together and we savored our favorite beverage: sausage gravy at the Bob Evans restaurant.

After sharing the gospel with Steve over a dozen times and realizing he just did not seem to understand it, I gave him the “Do You Believe” movie to watch. He really enjoyed the movie and it led to more discussions about Jesus. As the months advanced his health deteriorated more and more. I was planning on picking him up to go out to eat on Wednesday, August 23, 2017 but he texted me earlier that day and shared he would not be able to go out that day. I asked him if I could come and see him and was pleased that I was able to come to visit.

When I saw him, I realized he was getting weaker and would not be able to stay at his place much longer. I asked him the spiritual question again and heard his same response. I shared with him that there are two major differences between us right now. He asked me what were those two differences. I responded, “I know that when I die I will go to heaven and you still do not know where you will go. The second is this, you know that you will die within the month and I do not have any idea when I will die. Steve, are you ready to meet God when you die?” At that moment I saw the Lord convict, break, and open his heart to the gospel of Jesus Christ. He repented of his sins and prayed for Jesus to take away his sins and professed Jesus as Lord and Savior. The first thing he did after he professed his faith in Jesus was to voice text his daughter on this decision. He urgently texted her and said: “Alysse, make sure you and your husband watch the “Do You Believe” movie I sent you and bring it this weekend when you come visit. I believe!”

Steve was moved to the Hospice facility the following week and I was able to visit, read the bible, pray, and encourage him in his new found faith in Jesus the last few weeks of his life. After the man shared with me about Steve’s passing, I met with Steve’s daughter to plan his memorial service. His daughters told me that he talked about me all the time and how I encouraged him over the past year during his illness. They said that Steve told them that when he was diagnosed with cancer, he wondered what friends would stay around to help him. He told them, “I have to admit, I never saw Jim coming but he was a great encouragement and friend to me.”

When Jesus told His disciples to come follow Me and I will make you fishers of men, He did not mean to just share the gospel presentation once BUT to share the gospel with words and love in a relational setting. Through Steve’s friendship and subsequent salvation, I received the blessing Paul talked about in Philemon: “I pray that you will be active in sharing your faith so that you will have a full understanding of every good thing we have in Christ Jesus.” (Philemon 6) 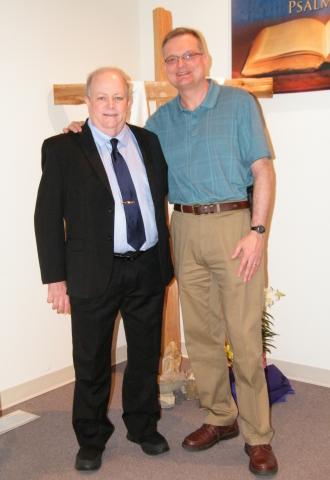 Thank you for sharing this beautiful story! You've encouraged me to be bold in looking for opportunities to share Jesus.

What Is the Church?

What Is the Church?

It's Almost Time to Go Home

Pray for the Lost by Name

That Is Why They Called Him Jesus