April of last year, I received a phone call from a woman in Pella, IA. Her name is Rosemary Daining and she attends Grace Fellowship. She wanted to have the Blanket Exercise at her congregation, but was not sure how, when, or what to do. Many calls happened between that day and January 2020. Conversations about promotion, planning, praying, laughing, and even developing a friendship.

The Blanket Exercise was presented at two congregations. They promoted the event on the radio, and with flyers, cards, signs, bulletin boards, and emails. Their promotional efforts were so effective that among the participants were people from the community and other denominations. The Christian Middle and High Schools also received the Blanket Exercise.

The reception the Blanket Exercise received was overwhelming. In spite of the freezing rain and cold wind, people filled the chairs that were already set in a circle. When Rose called couple days ago, she shared her experience. It was a joy to hear how blessed she was, and many others as well. She was ready to see what the Lord did during those days.

Pastor Kris and Principal Don sent me these comments that I want to share with you:

I'm so grateful for the way the Lord has provided us to take our workshops to different places. In the last four to five years, He has gathered those who feel committed to do the ministry of reconciliation through facilitating the Office of Race Relations workshops. All of them have busy lives with their families, jobs, ministries, and other activities they are dedicated to.

What made them say "yes" to facilitating the workshop? A sense of calling, a sense of justice, a sense of understanding what racial oppression is, the need to remind that absolutely everyone is created in the image of God, and for that only reason, it should not be a space for discrimination, prejudice and racism.

On January 8 to 14, eight members of the team were able to travel to Pella, IA including our director, Rev. Dr. Reggie Smith. To lead four Blanket Exercises is emotionally exhausting for the Native Americans facilitators, but despite that their motivation is for people to learn the history from a different perspective. For facilitators to have the opportunity to meet people, to have some deep conversations, to chat with the children of the schools, to share their stories, their experiences today, is always valuable. It also gives the opportunity for developing new relationships.

When we form new relationships with those we consider different and the others, they are no longer strangers and become our brothers and sisters.

The entire ORR Facilitator Team consists of twelve people plus myself. Even though most of them are from different regions, is not big enough to be able to cover all the regions. To be able to take the ORR workshops everywhere, our team needs to grow, but we also need your prayers, your support and your encouragement. 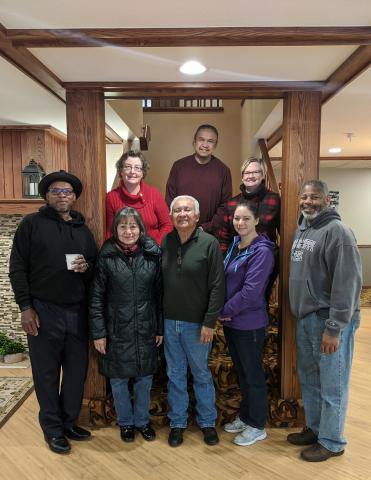 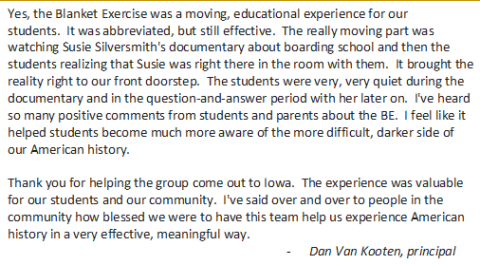 Experience the Blanket Exercise and Visit an Indigenous Centre

Grace Fellowship, a Christian Reformed Church in Pella, IA, is seeking a Lead Pastor to join us in our mission to Reach Up (praise and worship), Reach Out (sharing the gospel with our community), and Grow Together (building one another up in love, in service, and in discipleship).

Established in the mid-90s, Grace is a body of believers who desires to grow in our faith while reaching out to our neighbors in innovative ways, welcoming the unchurched into a loving and caring environment. We seek a pastor who is a capable communicator and one who walks alongside of us with pastoral sensitivity, serving with the heart of a chaplain as he preaches and teaches God’s Word. The application of Scripture to daily life with a strong relational orientation is a high value at Grace, both for those within our congregation and in the community we feel called to reach.

More information about our church can be found on our website https://gracepella.org or by contacting [email protected].

Thank you for sharing this opening!