On June 13, I had the privilege to speak to the delegates and representatives at Synod 2022 and commemorate 25 Years of Women in Ecclesiastical Office. I gave a brief history, provided some related statistics, and showed a video of all the many women currently ordained in the CRCNA. Following are my direct remarks (including a video).

Thank you for the opportunity to recognize this anniversary. I’m Elaine May, women’s leadership developer for the CRCNA. It’s an honor to be here with you today.

“This position is a compromise for the vast majority of the members of the committee, but it is offered in the hope that it will be positively received by a sizable majority of synod, thus providing a solution to our current dilemma.”

The current dilemma was the inability of Synod to agree on the role of women in the church since it began studying the matter in 1970. The committee recommended that Synod urge the churches to recognize that this issue is not one of salvation and that even in our differences we remain sisters and brothers in Christ.

This anniversary is ours. It belongs to all of us. We have all been participants in one way or another, and we have remained together in spite of our different perspectives on the interpretation of scripture. Whether you grieve or celebrate this milestone, we arrive at this day together which was the intent of Synod 1995 when they adopted the unprecedented recommendation to acknowledge both perspectives – that of women holding ecclessiastical office, as well as, the offices being restricted to men. Synod determined that both perspectives honor scripture as the infallible word of God. We adopted the recommendation and accepted this recommendation as our position.

I would like to recount a couple highlights from our history on this issue, fully realizing that there are parts of this story that are difficult to revisit for all of us.

The story begins in 1970, when synod appointed a committee, "to examine in the light of Scripture the general Reformed practice of excluding women from the various ordained offices in the church."

Three years later, the committee reported that the practice of excluding women from ecclesiastical office could not conclusively be defended on biblical grounds. Synod responded by appointing another study committee which returned in 1975 with the same conclusion. Synod 1975 judged that the church was not ready for women in office and they didn’t adopt the recommendation to open the offices to women.

Ten additional study committees would be appointed between 1975 and 1995 to examine a variety of related questions. For example:

Every year, it seemed, Synod found another question to ask, another facet of the issue to study.

Good theological work was done. And yet, over the first 25 years Synod could not agree.

The years between 1990 and 1995 were particularly hard on us as a denomination. When the offices were opened, but then closed a couple years later. There still remains, to some degree, pain and discouragement from decisions made and words spoken - on both sides of the issue.

In 1995 the advisory committee proposed the compromise and recommended that we recognize that there are two different perspectives and convictions on this issue, both honoring Scripture. They suggested we give classes the option to allow their churches to ordain women in all the offices. The committee also proposed a five year break on studying or discussing the matter.

Five years later it was reported that eighteen of the forty-seven classes had opened the offices to women. Synod 2000 did not accede to overtures requesting a reversal of the 1995 decision. They said, “Our differences in understanding the passages from Paul separate us neither from Christ nor from the one new humanity he is creating.”

For the past 25 years, we have had one position on women in ecclesiastical office that allows for two perspectives. Holding two opposing perspectives allows for delegates to protest the participation of women delegates at Synod, and it also allows for celebrating this anniversary at an elective banquet later this summer.

It has been challenging at times to honor our commitment to unity and yet here we are after 25 years. We are a testament to Paul’s words to the church in Ephesus. We are joined and held together in Christ Jesus as each part has done its work.

In the words of the first report on women in office to Synod in 1973 said, “We participate together as the body of Christ, and the Holy Spirit provides gifts for those who emerge as leaders in a wide variety of ministries.” Our evolving story reflects the truth of that statement.

Let me share some statistics to illustrate where we are after 25 years of ordaining women.

Synod opened the office of deacon in 1984, so after 36 years, 73.5% of our churches have women serving alongside men in the role of deacon.

After 25 years, 52% ordain women in equal partnership with men in the office of elder.

With regards to our women in the role of minister of the word and commissioned pastor:

Women were first approved as candidates for ministry in 1996. There were three in that inaugural class, each one of them are still active in the CRC. Since 1996, looking at the numbers in five year increments, we see the number of new women being ordained increasing. 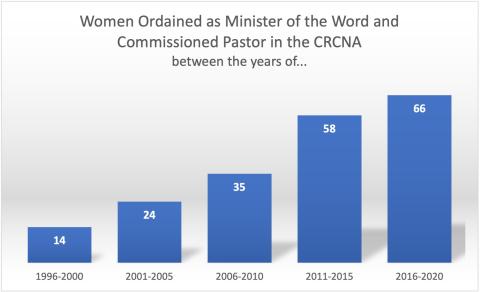 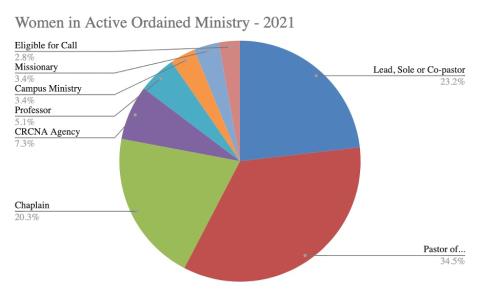 Today, as we recognize the 25th anniversary of the ordination of women in ecclesiastical office, we give thanks for the union we have in Christ Jesus and for the gifts of the Holy Spirit given for the building up of the body of Christ.

We also give thanks to God for

These are the women currently ordained in the Christian Reformed Church in North America. May Jesus Christ be glorified and his Church strengthened for God’s mission in the world.

Thank you, Elaine! I was going to ask you for this speech, but didn't dare. Now I'm so glad you've shared it this way, and it allows me to share with others, too. Thank you for this clear overview. Praying for you, all of the gifted women and men in the CRC, and the church as it moves forward.

Login or Register to Comment
Posted In
Leadership » Women in Leadership

No Shoes, No Pants, No Service

Latest in Women in Leadership

No Shoes, No Pants, No Service